How to connect different DC systems 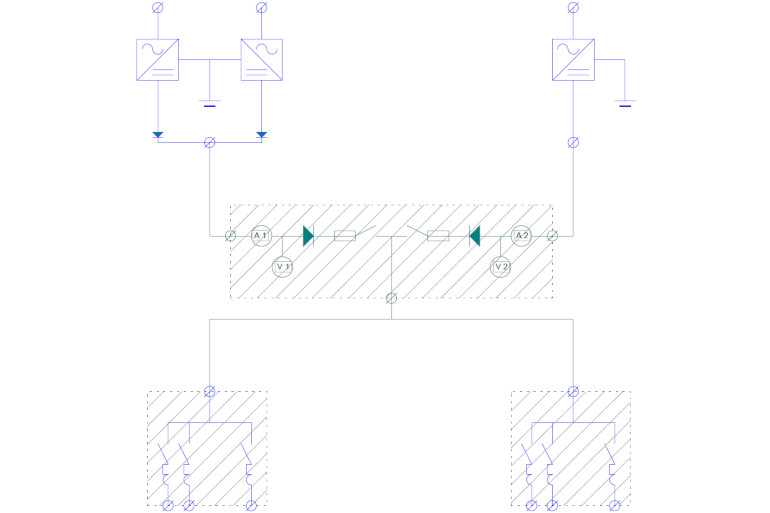 In order to increase the reliability of the installation, two different DC systems (with differing design, technology and life) can be connected.

The first step is to check the correct operation of the rectifiers and discharge the batteries at constant current.  This makes it possible to verify the origin of the failure (if present) - power input, equipment, batteries etc.  It doesn’t matter whether the rectifiers are single or double with high or low frequency, as the important thing is the voltage and current supplied, not the type of operation.

Next steps to be considered:

Two propositions are possible based on the nominal current of the rectifier and the power consumption of the installation.

In the original design (separate consumption and equipment), each rectifier should be able to feed their own power needs and charge the batteries.  If both systems are connected directly (without diodes) and there is enough current, it would be possible to perform a controlled charge of one battery, feed the plant and perform an uncontrolled charge of the other battery. Except in extraordinary situations (e.g. multiple power cuts), this option isn’t reliable or recommended, because, while it has the advantage of the batteries being charged longer, it has the disadvantage that one of the batteries is charged without any control.  Therefore, we recommend connecting both systems using diodes and while some battery efficiency is lost, charging the batteries is always controlled, so battery life expectancy is increased and maintenance work reduced.

The best solution is a wall-mounted battery cabinet (as shown in the attached image), adjusted to the specific needs of the installation (paying attention to short-circuit currents in NiCd batteries). It’s also important to define the installation protocol, displayed on a printed plate, to avoid fuses melting due to overcurrent if different voltages exist.